After a few questions from the slightly nervous Dutch couple Tom and Inge about opening a bank account in Portugal, I decided to offer my help to go with them to the bank.

When we arrived at the bank we asked for an English-speaking employee. We got the best they had: João. Luckily, I know my Portuguese fairly well by now and I told to him that they want to open a bank account. We all sat down around his desk and the nice man really tried to make himself understandable in English but I understood him better when he finally switched to Portuguese as a last resort. Using three different languages between us 4 (Portuguese, Dutch, English) during this ‘bank opening scene’ it soon became clear that it was not going to be an easy one.

Everything went well so far, passports, fiscal numbers were handed to João. Then he asked proof of residency in Portugal or a statement of the water or electricity bill. After explaining him that they are here to buy a holiday house and that they would need a Portuguese bank account to have water or electricity bills, he was happy with the signed promissory contract of the house.

The next question required information about their professions. Tom told João that he is self-employed in the Netherlands and that triggered João to become extra needy. João needed to see income statements from Tom’s company and company registration information. Well, Tom brought a folder full of organized  paperwork where even the official fiscal number documents were plastic-coated. But Tom didn’t expect to need company statements on his Portuguese house purchase holidays. After some frowned eyebrows and questions about the reason behind all this, dear João explained that they would like to know more about their clients and that it is Portuguese law to have this information recorded in their bank system.

Finally, João said that a proof of subscription of the company would be enough. With a sigh of relief we directed him to the website of the Dutch chamber of Commerce (KVK) where Tom could easily find his company details by doing a search using his registration number. But João didn’t look so happy and after a long silence, he said he needed to see the date of subscription of the company. To acquire that, the website asked for € 7,50 and Tom needed his KVK account details to enter the secured area. After one last try to call Tom’s accountant we weren’t going to succeed in obtaining this information, so I asked João if it would suffice to get a monthly salary statement of his wife Inge and that they would register the bank account only on her name. Yes, that was possible! So Inge called to the company she works for and asked them to e-mail João the statement.

After 45 minutes inside the bank, nothing had been done yet.

João continued filling in the impressive number of fields on his computer. Time passed slowly and we were listening to the ticking clock and the keyboard. Then João suddenly paused and asked for the names of the parents of Inge. Trying to hide her surprised reaction and a suppressed laugh, she wrote down the name of her father and mother.

1,5 hour later we thanked João very much for his time and once outside, we took a deep breath of the fresh Portuguese air.

Does this sounds familiar to you or did you have an entirely different experience? Maybe it was better….or worse… I would like to hear it! Share you experience, leave a comment. Thanks!

Read more information about bank accounts in Portugal on the websites below:
www.everythingoverseas.com
www.angloinfo.com

For your entertainment a small sketch from Little Britain 🙂 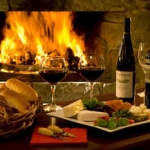 Chill out, this is how you keep warm in the winter